Our destiny is improved by good, novel ideas.

Born in 1929 in Istanbul, Alarko Holding Founding President Üzeyir Garih completed his undergraduate degree in Mechanical Engineering at Istanbul Technical University in 1951. He worked as a plant engineer at the Turkish branch of Carrier Corp. and was specialized in this field until 1954, when he accepted the offer of İshak Alaton to became a co-founder of Alarko, an ordinary partnership. Since then, the company continued to grow and became a holding and Mr. Garih remained co-president of Alarko Group of Companies with İshak Alaton.

In addition to his duties at Alarko Holding, Mr. Garih was an active member of the management and advisory boards of many local and international foundations and associations including TUSIAD (Turkish Industrialists' and Businessmen's Association), DEIK (Foreign Economic Relations Board of Turkey), MESS (Turkish Employers' Association of Metal Industries), Türk Loydu Foundation, SISAV, Rotary, Lions, Propeller, Council of Istanbul Chamber of Commerce, Turkish Tourism Investors Association, AIESEC, etc. He was also a chairman of the Foreign Economic Relations Board's Turkish-Belgian Business Council and the Mass Housing Builders Association (TOKYAD).

His articles, primarily on management, organization and economy, were published in the Turkish Daily News and Akşam newspapers on a weekly basis and in the Babıali magazine on a monthly basis. Mr. Garih made focused efforts for the education of the youth. Mr. Garih is also the author of 5-volume 'Deneyimlerim', 1-volume 'İş Hayatımdan Kesitler' and 8 volumes of other books published by Hayat Yayınları.

He gave lectures on organization as part of an MBA program at Yeditepe University. In 1984, he was awarded an honorary PhD degree by Istanbul Technical University and became the Honorary Consul General of the Republic of Philippines in Istanbul in 1990.

He accepted the offer of İshak Alaton to became a co-founder of Alarko, an ordinary partnership. 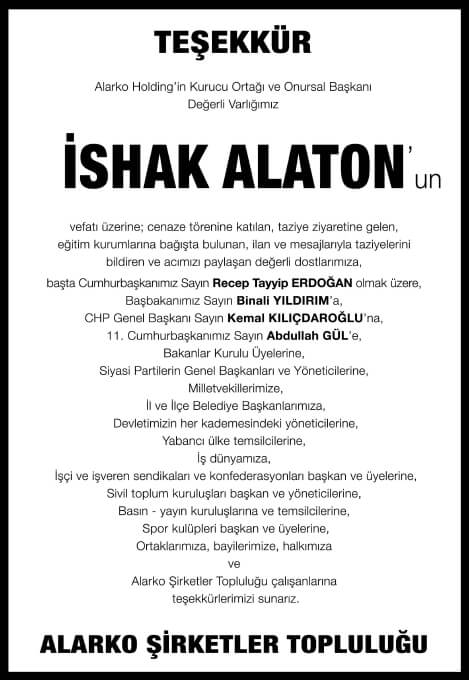 We would like to take the Day of Democracy and National Solidarity as an opportunity to extend our deepest gratitude to all of our Nation including mainly our veterans who fought heroically for protecting our country and democracy against the atrocious coup attempt of July 15th, 2016.

We pray to God for grace and mercy upon the democracy martyrs who lost their lives in the chain of events that occurred and commemorate their bravery.